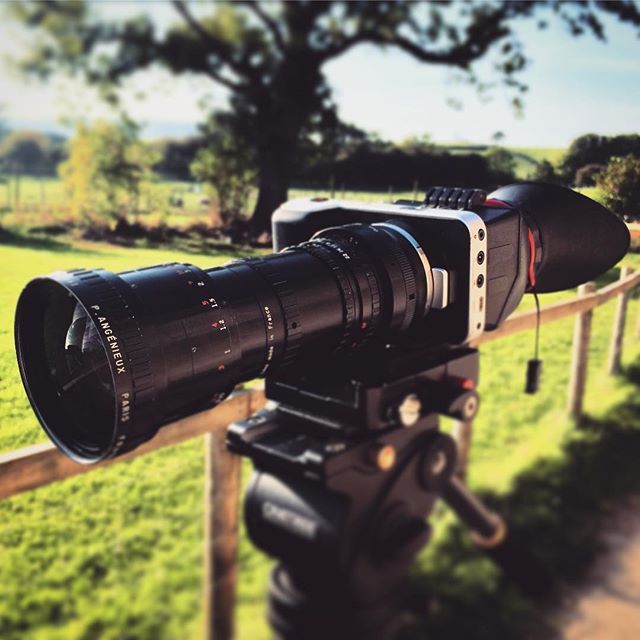 In this post we continue to look at various lenses for BMPCC (and upcoming Super16 replacements from BlackMagic). Over the last few years I’ve been collecting various 16mm (film format) and Super16 lenses to see what works best and also offers best value for money.

Among these, there are plenty of little Angenieux zooms that sound pretty cool and unlike their bigger (35mm/Super35) equivalents they are pretty cheap too.

Some of the previous examples featured on the website are:

My problem with both of these lenses is that on a Super16 camera like BMPCC these 2 lenses aren’t really all-rounders. At the widest end their field of view is equivalent to a 50mm lens on a full frame camera and on the long end it’s equivalent to 200mm on FF, so they feel more like telephoto zooms rather lenses you could be used for any shot, which is where Angenieux 9.5-57mm lens comes in with its much more usable focal range (at least in theory).

While it does seem to have a perfect range for a Super16 zoom, this lens was actually designed for 16mm film cameras, which in theory makes it unsuitable for a Super16 camera like BMPCC and as a result, it can often be bought cheaper than the popular 17-68mm.

What many people do not realize is that 17-68mm is also a 16mm lens. It vignettes slightly at the wide end, but that seems to be accepted by everyone and people happily pay up to $500 for one of them. Some ebay sellers even market them as Super16 lenses and I’ve seen one like that sold for $1.5k which is really unreasonable.

The point of this post is not just to review the 9.5-57mm zoom, but to help Super16 users realize that they do not have to overpay for the 17-68mm when 9.5-57mm actually has much more potential for less money.

How USABLE is it?

Yes, 9.5-57mm also vignettes at the wide end as can be seen in the video above, but from 17mm, sensor coverage is pretty much the same as on 17-68mm. In addition to that you still have the flexibility to go much wider if needed. Vignetting is almost invisible with a 2.35:1 aspect crop, which we often use anyway, or can be hidden with a 5-10% timeline crop and once you get over 25mm no correction of any sort is needed which is the same for 17-68mm.

Another little bonus on 9.5-68mm is that it is even faster than 17-68mm at the wide end, although by 17mm both are probably around F2.2. The 9.5-57mm has a handy preset function on the aperture ring which let’s you lock it at F2.2 as widest setting to prevent exposure change as you zoom the lens in. The aperture adjustment is click-less and super smooth too, so subtle exposure adjustments are certainly possible with this lens. Zoom and focus rings are also super smooth on my copy and even though focus ring extends when rotated (same with pretty much every Angeniux lens from the time) a 1cm thick focus gear will do the trick for those planning to use it with a follow focus. The actual focus throw is 180° and closest focusing distance is 0.6m/2ft both of which aren’t amazing, but reasonable for a zoom. Overall build quality is super solid as expected, no plastic part here!

This lens is suppose to be parfocal, but my one starts to drift out at the wide end. I’m guessing my adapter possibly needs shimming. Talking about the adapters, I have a semi-permanent adapter my lens which is super solid with absolutely no play that you get with many quick-swap adapters. The real reason why I went for this adapter though is because there was nothing else that would fit this lens. Agnenieux 16/S16 lenses were made in a few different mounts including Arri-S, Arri-B, C and lastly, Cameflex which is the one I have and it’s the mount that many 9.5-57mm seems to be sold with. Initially I bought a cheap Cameflex to PL ring, hoping I’d be able to use it with my PL to MFT adapter, but turns out that it will only provide close/macro focusing and in reality it’s pretty much useless, so in the end I had to settle for a more expensive $80 adapter, but I must say, it was worth the money because it’s much more solid than most Arri to MFT adapters at a similar price.

Lastly, let’s not forget the sharpness and overall look. Again, this is where this lens pretty much matches the 17-68mm, being a bit soft and dreamy wide open, but improving quite a bit when stopped down by a stop or two. Most of the video above was shot at around F4 and to me it felt as sharp as I’d like such lens to be. After all, most people would buy such lens for its old school feel and character, which it has plenty of! If you are after high contrast, super sharp images, then modern lenses will do a much better job.

So, let’s recap the pros and cons of this lens!

So would I recommend this lens for a Super16 user? While I like it more than the 17-68mm for its wide angle flexibility and better close focusing, I would still advice you to ignore the crazy $1k prices pushed on us by a certain ebay seller. If you can find one for well under $500, then it’s well worth looking at as long as you can live with its vignetting limitations and you like its old-school character. Whatever the price you’d be happy to pay for a 17-68mm should also be a good indication of the price you should pay for this lens. It’s worth noting that there is also a 9.5-95mm version out there, which will probably be even softer wide open, but if found at a bargain price should probably be considered too!

As for me, I’ll be keeping my 9.5-57mm for now because I genuinely like it and also want to compare it to a few other Angenieux zooms I collected over the last few years. A big Angneieux zoom comparison is coming soon!

VintageLensesForVideo.com is dedicated exclusively to lenses, vintage ones in particular. What excited me the most in my research of vintage lenses is the discovery of forgotten, hidden gems that are not popular nowadays, but still offer great results. There are literally 100s of different, very interesting vintage lenses out there, most of which offer a lot of benefits for VIDEO USE over most modern lenses with either DSLRs or Large Chip Camcorders.

This article is used on license from VintageLensesForVideo.