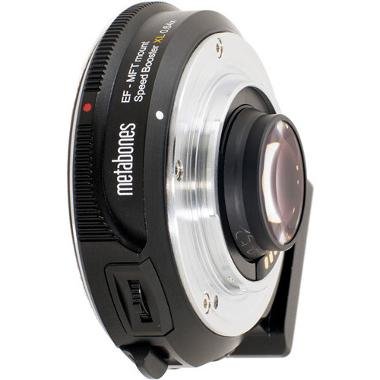 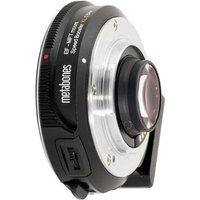 The Metabones Canon EF to Micro Four Thirds T Speed Booster XL allows you to pair Canon EF mount full frame lenses with certain Micro Four Thirds cameras (see Notes tab) and increases the effective field of view and the maximum aperture of the lens you're using. This is handy for achieving wider views with more dramatic depth of field effects on what is otherwise a sometimes uncompromising camera sensor due to its small Micro Four Thirds size.
The Speed Booster XL works by condensing the light from a full frame EF mount lens before projecting it onto certain Micro Four Thirds sensors. These sensors are able to gather more light than normal and reduce the crop factor you experience from 2x to 1.28x. For example, your Canon 40mm f/2.8 STM lens becomes an effective 51.2mm with this Speed Booster XL on certain Micro Four Thirds cameras instead of the 80mm effective view you'd have with a straight adapter. This effectively turns your 2x Micro Four Thirds sensor into a 1.3x APS-H one! Plus, you have the benefit of using a wide variety of Canon EF lenses while retaining lens AF and image stabilization. Metabones has designed particularly good AF support for Panasonic Micro Four Thirds cameras, such as the GH5, making this adapter a boon for GH series shooters wanting to use EF mount lenses. That said, Panasonic's video AF will always carry a risk of hunting longer with an adapter, including this one, versus the performance seen in native Panasonic lenses. Also note that when using Cinema 4K video mode, the horizontal full frame crop factor is reduced from 2.34x to 1.50x – closer to Super 35/APS-C.

By concentrating the image circle from a lens, this Speed Booster XL also "brightens" the image – maximum lens apertures are increased by approximately 1.3 stop down to the sub-f/1.0 range (maximum of f/0.80). Both the camera end and the lens end of this adapter are made of brass that are precision-machined and plated with chromium. The Metabones Canon EF to Micro Four Thirds T Speed Booster XL is a great tool for those using certain Micro Four Thirds cameras (particularly the GH4 and GH5) who want to also use a large selection of Canon EF mount lenses while getting that added benefit of a "boost" to both field of view and maximum aperture.

This seller has not yet provided any specific selling policies. Please send a message to ask about payment, returns, or other policies.